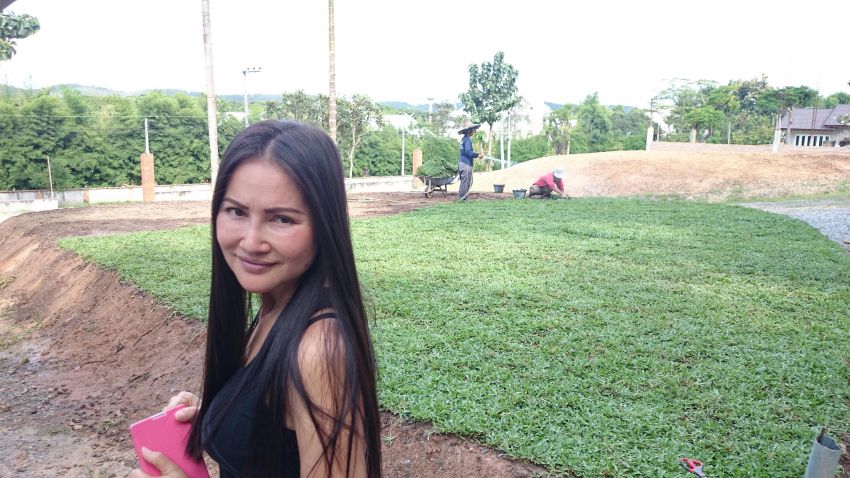 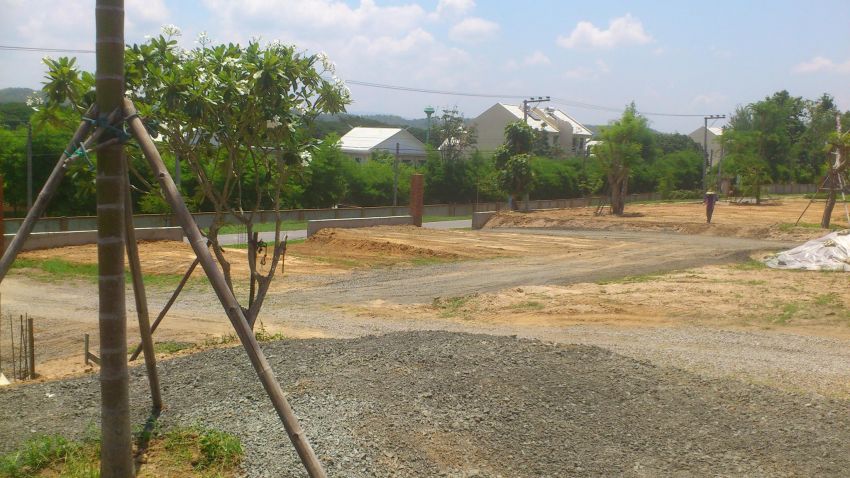 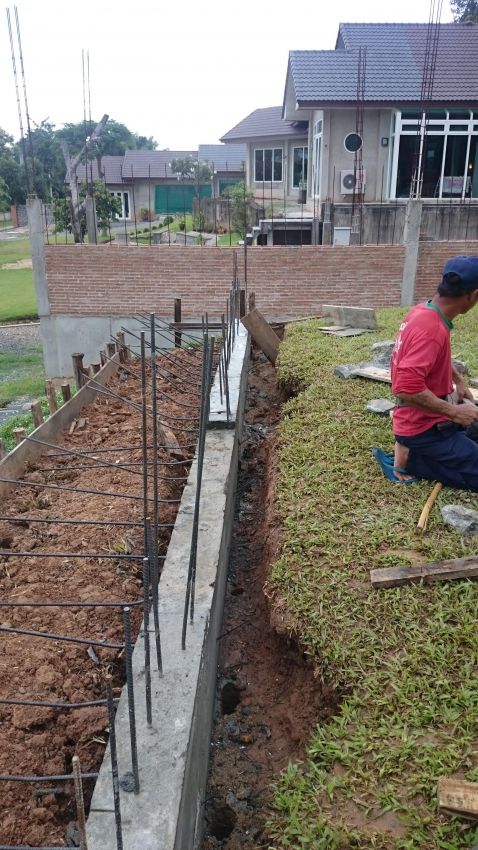 (2) Chenoted hillside lots bordering up to the rear to forest reserve, future pond features and public road out front. Seven lots in total as to form our overall area. These two where modeled partly into forming a forest garden hill with water features and solid draining capacities. Standing directly opposite Prem and Premburi amid a premium project.

These two lots are on offer and could be aquired or subdivided in addition to and as to complement either Build1 (add number 296398) or and Build2 (add number 266544). Tabun Management Maerim the Owner's Company offers these lots as green spaces to benefit the grounds and more specifically the two adjacent adds on offer mentioned.

PARAGRAPH ON LAND; All of our lots in the project are Chenoted and in addition we also have an area of Forest rearward on registry and have applied for next step document. The Community here, has interest's as well as its not only Us who are bordering up rearward and many other grant's are in the works (Map available and other related docs). Our Chenoted lots are subdivided into (7) and the forest area rearward bordering is in one section across the entire span, in as it relates to Us and our project.

In good standing the chenoted lots should be structured under a leasehold. Reasoning is, as to not jeopardize the forest application as this is made out and valid to a Thai person only and her lineage only, and has but a single family name attached in validity to it. We have heard of Thai people trading these application type documents but at a risk, surely. Even have heard of foreigner's joining the party but i doubt that ever works out. Therefore the correct line of action here is to leasehold the chenoted lots until the next step forest documents have evolved and are in a state whereas to be incorporated into the existing Chenotes and become ripe for subdivision and trade.

The forest aspect is the magic here, it beautifies and makes the feeling happen here like in a Park. Some will see it as a bonus. We have inquired about re subdivisions already forest wise and chenote wise and have been advised to stay put until. You could buy rice field, moo baan or other land with freehold. The pretty stuff usually is non chenoted or on a lesser document. Perhaps ideally like HERE; chenoted land with the rearward forest parts under process, ultimately its all about choices and exercising the correct legality as it applies.

In regards to structures, if you plan on buying any structures and a construction relating to building one up, they can be re sold if desired. Selling you're structure would therefore entail that a new lease be re issued in the name of the new owner. Leases are transferable to a third party in the event that the guarantor clause is incorporated into the document and registered at the Land Office. This will then further protect your interest in the house. (Recommended, Chiang Mai Lawyer Siam Legal).

Whatever the size or number of houses/villas, garden or garden like features are a must in being planned in, and incorporated. Thus ticking another box in the right places in regards to achieving luxury living standards. One example of this in our vicinity is at Azaya Villas Chiang Mai, and its hill feature there (photos available). Our hill and its features are under construction and are unfinished currently, see photos. The idea is to tie the hill in, as to flow with the surroundings. The forest, the garden and the hill's own water features. The entrances ways, the via's and of course the garden's main entrance and future swimming pond area which will include a water well at the hill's base and importantly serving as The Hill's Main Entrance to the public road. A Japanese or Asian styled key hole gate design to the road as the main forest garden entrance. Creating an appeal and showcasing a peek into the interior's grounds and serenity. Secondly perhaps, a Tori Gate up on the hill symbolically placed at the center's edge. On the grassed area a large stone Buddha could sit upon a giant tree trunk, to perfection.

The hill is, and also acts as a crucial and important drainage apparatus. As such the front retaining area of the hill was built up using footings at the base in support, much like you would on a house. A frame was constructed using the footings all the while incorporating the two garden squares within the slope as to beautify with flowers and vegetation with. Its center, cement slide and support as seen, could be made to be, as a stone or marble step like feature with water flowing down into the water tub system built in at the bottom. It comes out being monsoon proof as two rain seasons having passed have demonstrated. Stunning feature indeed as to achieve a feeling and a drainage functionality all incorporated into a solid system. The upper corners of the hill have been made to accommodate the decorative stone water pots at each end. The upper center part and edge is a drain to the grass area atop. The water is channeled off from the center as to flow thru PVC pipes along the sides into the receiving tub at the bottom. A narrow patio along the front's upper center edge with teak wood set in steel to provide seating as to enjoy the surroundings comfortably is planned.

Area is 1.4 Rai with a width of 14m, wedged between Build1 (add 296398) main house's garage (bottom) terrace, pool structure (on top) and reaching Build2 (add 266544), the other Premium House under construction there, bordering up to the via. In depth 40m from the forest's rear retaining wall to the wall out front, reaching the public road and exterior wall.

I like to refer to this add as simply, The Hill'
Similar ads 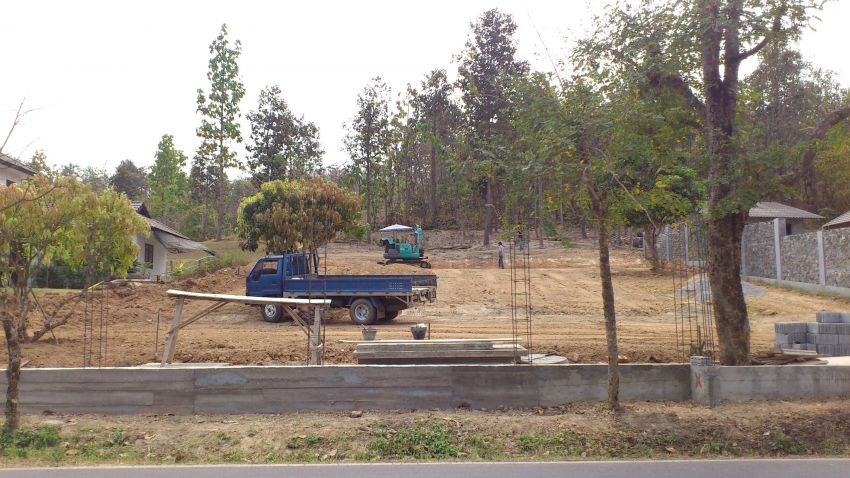 Premium location and lot on elevated hillside, directly opposite Premburi and 500 meters from Prem International School's main entrance. An impressive lot shape with 30 plus meters of road frontage tapering down to 22 meters rearward and with 46 meters of depth until the forest rearward. 238 wha on a mature chenote with first steps infra structures already in place. Expenses in infrastructure is associated with the walling, the modeling of the lot, the drainage aspects, the gravel and effecting the soil compaction. All of these 4 Stages can be viewed in photos over time-lapsed (in Onedrive). A bonus to the property is that it is pleasantly bordered by a forest rearward and on either side by high end neighbored houses and to the front by public road. An application and request for a sotokor has been registered by the owner for an area rearward to the chenote. Notice there are several other applications in the immediate area as this is a community effort overall (in Onedrive). The forest beautifies the parcel and adds space and appeal to the lot and in turn overall views surpassing 1 rai are thus achieved. The sale should be structured as a leasehold as to remain in good standing and as to not jeopardize the document in process as they also relate to other adjacent chenoted lots owned by the same owner. On option the owner is providing and offering thru its management company the possibility of a building contract to be tabled separately, although not mandatory. The owner does reserve the right to approve any plan set forth as well as approving and dictating of the house placement on the lot. We like and welcome comparison from Consulate Villas and En Pano Maerim in our area. A similar modern house plan is being offered by the owner's company to that of the Consulate Villas but with the addition of a double garage dugged into the hillside sitting under the structure enabling a basement/cellar/storages/hobbies, plus enabling a large terrace on top. As well an overall widening of the structure by several meters and many other tweaks to better, especially in the window designs and roofing applications. A Pool is also on option and its placement is sublime in design and function as our lot emphasizes. Ultimately this is a most private land set up in the most premium of zones at comparable rates to the Consulate but with a lot more on offer within compatible price ranges. Reference to add #296398 or Build1, as it lays adjacently to this add and is currently residence to the Owner. To better understand also reference Build2, add #266544 and The Hill, add 296629 as to get a feeling of the overall premiumly located grounds, an impressive 147m of frontage, in a 5 Rai sequence' 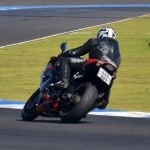